skip to main | skip to sidebar

We had a major thunderstorm Saturday night,  it rained in copious amounts. When we got out of church Sunday morning it was still raining. We certainly could not do any outside touring so it seemed that our destination was to be the art museum in Terre Haute. Most fortunately for us the museum was closed because we discovered another wonderful museum,  the Vigo County Historical Museum. It is located in an old Victorian Home built in 1868 and  first owned by a local baker and confectioner. 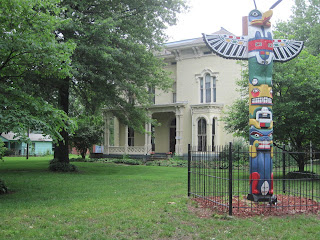 When we arrived we were the only visitors so the docent gave us a personal tour of the museum. The house contains 12 rooms- among them restored Victorian rooms, a drugstore collection, toy shop and a dressmaker's shop. We learned a great deal about the local history. The city was once the home of the Root Bottling Company. In 1915 they designed the winning glass bottle for Coca-Cola, it was created in the shape of a cocoa bean. Terre Haute is also the home of Clabber Girl,  makers of baking powder and roasted coffee. The original building still stands in the downtown area of Terre Haute. And did you ever drink Champagne Velvet beer?  Terre Haute  has a brewery which is famous for producing that beer. The secret ingredient is cornflakes, or so we were informed by our museum guide. One additional interesting fact which we discovered in the museum is that the city was the home of the poet and philosopher Max Ehrlmann. He is mostly remembered for writing "Desiderata". 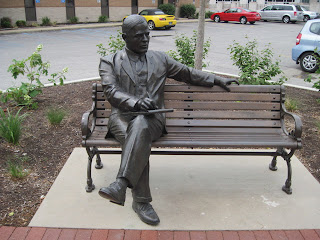 John and I drove from the museum to 7th and Wabash streets to view the above sculpture of Ehrmann. It was in this vicinity that he was often seen writing. In 1926 this corner was designated as the "Crossroads of America". It is where U.S. highways 40 and 41 intersect (highway 40 opened the west, highway 41 was a north-south route). 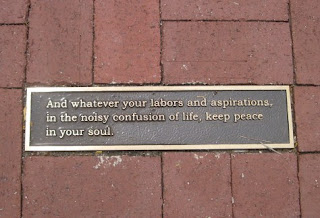 On the bricks around Ehrmann's statue are quotations from "Desiderata".  We enjoyed our time in Terre Haute very much and wondered why we never made it a week-end destination during all the years we lived in St.Louis. Our last stop for the day was in Brazil, where we enjoyed an outdoor concert by the Brazil Concert Band. The band has been playing for 150 years, and played for the occasion of the Lincoln-Douglas debate. 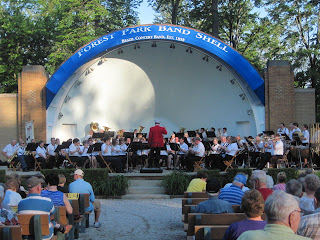 Posted by John and Diana Schramm at 9:37 AM

John and Diana Schramm
A retired couple that sold their house and traded it in for an RV to travel around the country and see the US from the road.